A complete analyses of logistics trends, technologies, and services

The phrase “fail fast” is increasingly finding its way into conversations about digital transformations.  The implication seems to be that fail-fast is a necessary component of a digital work culture. From an IT perspective, it makes sense. However, it really doesn’t align with how supply chain and plant operations need to evolve. To me, there is a looseness of interpretation in the use of “fail fast” that is either self-serving or a miss-the-mark attempt at communicating a point of what it means to have a digital-first industrial work culture.

Various fail-fast philosophies have been around for a while and can be traced back to software and Internet startup roots in the early 2000s. The idea was particularly suited to entrepreneurs who needed to try various iterations (solutions, economic models, customer engagement, etc.) in the market to find what resonated with customers and prospects. It was meant to counter “keep-the-ship-steady” approaches to building a business. It made its way into IT agile software tenets to distinguish that modern development method from established waterfall processes. 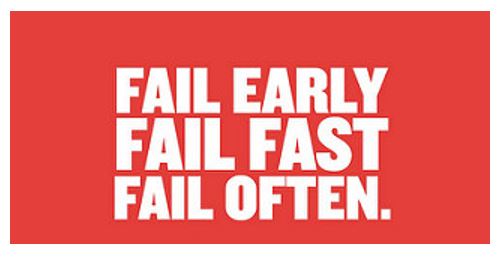 Like a lot of business phrases, fail fast has taken on a larger context to describe an operating philosophy that can, seemingly, be applied almost anywhere. As it moved beyond the scope of agile software methodology, it lost its distinction, where the “fast” part of it had been about applying a feedback loop to reduce the communication time from test to development.

In current parlance outside of IT, people using the phrase seem to imply that you quickly try things, see if they work, and then learn from them. From what I can tell, that line of thinking also implies that failure is just a natural and inevitable part of the process, which is a far cry from its use in agile software coding development.

As industrial companies ramp up digital transformation activities, I’m seeing this broad-brush definition find its way into the increasingly frequent interactions of IT and technology providers and personnel. I get it, operations need to think about new ways of doing things; they can’t be afraid to change and it’s hard to do so.

However, pushing this line of thinking to operational personnel is a not only counterproductive, it ultimately clouds meaningful dialogue. Failure at any pace is anathema to how they have been trained to think or operate, and rightly so. The consequences of risk won’t allow it when the fast failure could lead to a lost life or millions in compromised revenue. It’s not acceptable. Effective control is mission critical.

Yet, organizations know they need to rethink deeply entrenched approaches to how they operate and increasingly understand the consequences of not doing so. Those that are having success are working on instilling a digital-first industrial work culture. They aren’t concentrating on failing fast. Instead, these cultures are building into the work norm the idea of experimenting quickly, where failure might occur but isn’t necessary to achieve success. A digital-first work culture understands:

Words are just words, of course, but work cultures are built on concepts that gain gravitas and weight based on how they are presented and communicated throughout organizations. Fail fast should give way to experiment quickly. It’s the hallmark of a digital-first work culture, which is necessary to digital transformation.