Last Friday marked the 32nd anniversary of the largest art heist in the world. In the early morning hours of March 18, 1990, two men, disguised as police officers, talked their way into the Isabella Stewart Gardner Museum in Boston, where they blindfolded and tied up the two security guards, and made off with thirteen works of art. Among them was The Concert, one of only 34 known paintings by Johannes Vermeer and thought to be the most valuable unrecovered painting in the world. Also missing is The Storm on the Sea of Galilee, Rembrandt’s only seascape, as well as other paintings and sketches by Rembrandt, Edgar Degas, Édouard Manet, and Govert Flinck. Last Friday was also the day that I finished the podcast Last Seen, produced by WBUR in Boston. In the podcast, which I highly recommend listening to, staff from WBUR and the Boston Globe join forces to tell the story of the FBI’s investigation into the heist, and the cast of characters from local organized crime that were at one point tied to the theft. And now, 32 years later, with a reward of $10 million on the line, the $500 million worth of missing artwork has yet to be located. And it sounds like authorities have no more answers than they did on the morning of March 18, 1990. And now on to this week’s logistics news.

As the war rages on in Ukraine, more and more companies and countries are looking at ways they can help with massive humanitarian aid. Amazon has announced that it is converting warehouse space in Slovakia, previously used to fulfill customer orders, into a massive humanitarian aid hub to get much-needed supplies to refugees fleeing the war in neighboring Ukraine. Amazon says teams from around the world came together to convert 5,000 square meters of space in 10 days and that it’s the largest such hub Amazon has ever built. Amazon will leverage its expertise in global logistics to get such things as shelter materials, hygiene items, blankets, and clothing to front-line organizations quickly and efficiently. A network of fulfillment centers across Europe are prepared to deliver more than 4 million items donated by both Amazon and its customers, with the company filling in what supplies it must donate directly based on charity needs. Customers in Europe are able to donate to support the efforts through dedicated Wish Lists on Amazon’s European stores. 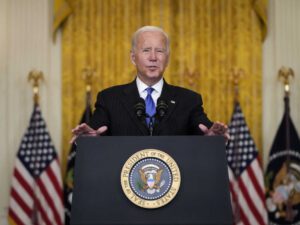 The reality, at least from a US farming perspective, is that the country imports little from Ukraine and Russia. However, food and farming costs are expected to rise. Even though only a fraction of the food eaten in the United States is imported, with much of that coming from Mexico and Canada, the ripple effects of the conflict in Ukraine will conspire to further drive-up food prices and keep them high into next year. The driving factor here is fertilizer. Because Russia is a main producer of fertilizer and other agricultural chemicals, the conflict is likely to have an impact what is grown this year on American soil. According to Richard Guebert, from the Illinois Farm Bureau, the cost of fertilizer is surging. As Guebert said, “last year, fertilizer was $510 a ton last year; this year, it’s $1,508. I have no choice but to pay it to meet my target crop yields.” And while the price he is paid for his grain will rise, too, “prices will reach a point where no one can afford to purchase them.” The ongoing Russian assault on Ukraine continues to make supply chain waves. More than a million containers set to ride 6,000-plus miles of railway linking Western Europe to Eastern China via Russia are now having to find new routes by sea, adding to costs and threatening to worsen the global supply chain chaos. With Moscow’s war raging in Ukraine, exporters and logistics firms transporting auto parts, cars, laptops, and smartphones are now looking to avoid land routes passing through Russia or the combat zone. Security risks and payment hurdles stemming from sanctions are mounting, as is wariness that customers in Europe could boycott products that used Russian rail. The rail links between China and Europe have been forged over the past decade as part of President Xi Jinping’s new Silk Road project, which later morphed into the “Belt and Road” initiative. It is an ambitious mix of foreign policy and economic strategy to extend the country’s influence across continents. When supplies are low, and demand is high (or even at normal levels), prices tend to surge. With more sanctions being levied upon Russia, one would think that diamond prices in the US would be surging. This is mostly due to the fact that Russia supplies nearly 30 percent of the world’s diamonds. Well, according to an interview with Gina Drosos, CEO of Signet Jewelers Ltd., the owner of Kay Jewelers and Zales, this is thankfully not the case in the US. The forecast from Signet comes as the broader diamond industry is trying to assess the upheaval in the Russian market. US President Joe Biden banned the import of rough diamonds from the country earlier this month. Signet then went a step further, ordering its suppliers to avoid buying any new gemstones that were mined in Russia, even if they were cut and polished in another country. According to Drosos:

“If 30 percent of the world’s supply of diamonds goes away, why wouldn’t you expect the prices to go up dramatically? It’s because there’s another outlet for those goods. Historically, most of the largest Russian diamonds go to Asia.”

Not surprisingly, Instacart is pushing to expand its business. With new entrants to the market promising 15-minute delivery, it is making companies like Instacart make adjustments. And adjust they have. The on-demand grocery delivery company announced this week several new services for retail partners, including one called Carrot Warehouses, which promises to help grocers build out the infrastructure to support 15-minute deliveries. That would cut Instacart’s quickest existing option — 30-minute deliveries — in half. In an interview with CNN Business this week, Instacart CEO Fidji Simo said the details may differ depending on the retailer but “the standard model” for the new service will entail Instacart leasing small warehouse facilities and handling “a lot of the labor and technology.” The retailers will supply the goods and be in charge of inventory and supply chain management. Canadian Teamsters and CP Rail blamed each other for a work stoppage Sunday that brought trains to a halt across Canada and interrupted fertilizer and other shipments to and from the US. More than 3,000 Canadian Pacific Rail conductors, engineers, train and yard workers represented by the Teamsters Canada Rail Conference are off the job after both sides couldn’t reach a deal by a midnight deadline. Canadian Pacific covers much of the US Midwest and is a large shipper of potash and fertilizer for agriculture. It also carries grain from the U.S. to its northern neighbor for domestic use and exports. The railroad serves the Dakotas, Minnesota, Iowa, Illinois, Wisconsin, Missouri, and other states, according to a map on its investor website. CP also operates in New England and upstate New York, spokesman Patrick Waldron said. Both sides say they are still talking with federal mediators.

As automakers around the world set bold targets for vehicle electrification, many in the industry are looking to nickel — an integral component of most lithium ion batteries — as a major hurdle. While there’s enough nickel in the ground to support a major EV ramp up, there are not enough planned mining projects or processing facilities to make the type of high-grade nickel that’s needed for EV batteries. Meanwhile, the nickel content in battery cells is only increasing, according to Mark Beveridge at Benchmark Mineral Intelligence. That’s because more nickel means energy density. Enter the proposed Tamarack Mine in Minnesota, which is being developed by Talon Metals and mining giant Rio Tinto. Although it’s yet to go through the permitting process, Talon has already secured a supply deal with Tesla to get Tamarack nickel into EV batteries.

And finally, pure-play online grocer Farmstead has teamed up with automation specialist Dematic to offer an e-grocery “warehouse in a box” solution. In announcing the partnership this week, Burlingame, CA-based Farmstead said Dematic’s supply-chain solutions provide “the final component” for its end-to-end grocery e-commerce platform. The online grocer began licensing its Grocery OS technology stack to other retailers in September 2020 to provide turnkey solution for companies to get a dark-store delivery operation up and running in two to three weeks, from securing commercial real estate space to inventory sourcing to delivery service. Automation caps off the warehouse technology component for more efficient fulfillment.

That’s all for this week. Enjoy the weekend, and the song of the week, Rhymin’ & Stealing by the Beastie Boys.