I’m always on the lookout for companies that are using social networking technologies to enable business processes other than marketing and customer service. Yesterday, I came across a Financial Times article that mentioned two examples: Red Robin and GE. Here are the excerpts:

Red Robin, the US fast-food chain, used to take 18 months to create a burger [emphasis mine], waiting for sales figures to come in from small trials, [Adam Pisoni, co-founder and chief technology officer at Yammer] said. But by putting the servers in a Yammer group with the people who developed the burger, they could quickly share customer responses in the restaurant, cutting the gestation period to four weeks.

Peter Coffee, vice-president of platform research at [Salesforce.com’s] Chatter, said General Electric was using the service to cut the time spent responding to machine errors. “A machine doesn’t need to turn on a red light, it just updates the right conversation,” he said. “This takes it from a one week response time in a case surrounding a jet engine to bringing it down to single minutes as Chatter could swarm the appropriate expertise immediately.”

These examples point to a key metric that’s emerging for quantifying the value of social networking: Time-to-Resolution.

In other words, by enabling people (across functional groups and organizations) to communicate and collaborate more effectively, and in a more scalable way, companies are able to resolve problems faster, develop products more quickly, and make smarter decisions faster — all of which are imperative in a fast-changing business environment.

What’s the potential value in dollar terms? According to a McKinsey & Company report from July 2012, “[social networking technologies], which create value by improving productivity across the value chain, could potentially contribute $900 billion to $1.3 trillion in annual value across [consumer packaged goods, retail financial services, advanced manufacturing, and professional services]…Two-thirds of this potential value lies in improving collaboration and communication within and across enterprises.” 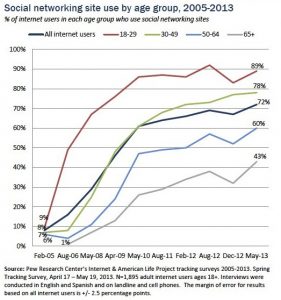 These results coincide with my own experience. Four years ago, when I started conducting executive workshops on social networking, very few supply chain executives (who tend to fall in the Baby Boomer generation) reported using social networking technologies. At most, they had a LinkedIn profile and that’s it. Today, however, many more hands go up when I ask the question, and executives are not only using LinkedIn in more diverse ways, such as participating in group discussions and to search for new career opportunities, they are also using Facebook, Twitter (although still in the minority), and enterprise social networking tools like Yammer and Chatter.

The bottom line is that Baby Boomers are no longer Luddites when it comes to social networking — or at least they are much less so today than they were just a few years ago. And as their experience with social networking increases, both at home and at work, I expect their skepticism and resistance to change will decrease, which will lead to greater adoption of social networking technology across business processes.

That’s my bet, anyway. What’s yours?

The logistics industry is obviously interested in what sorts of taxes might be applied to fuels that emit carbon dioxide (CO2). Whatever laws are enacted will depend partly on the public’s opinion on these issues. Recent surveys show somewhat contradictory reactions in the American public as to whether green house gases are causing global warming, and if so, what should be done about it.

This decline could be explained by the “Climategate’’ controversy, which skeptics publicized late last year as evidence that global warming data is not credible. Or it could be explained by an unusually cold and snowy winter in much of the U.S. For the first time in recorded U.S. weather history, snow was on the ground in all 50 states last month. Or it could be that economic pressure is leading some in the public to put more focus on their own economic interests.

Meanwhile, a report by the Pew Research Center points in the opposite direction. Their survey included almost 1,400 respondents and was conducted from February 3-9 2010. A majority (52%) of Americans favor setting limits on carbon dioxide emissions and making companies pay for their emissions, even if it may mean higher energy prices; about a third (35%) oppose the proposal. In this case, the number of respondents in favor of setting limits actually increased by two percentage points since the last survey was conducted in October 2009. However, as was the case in October, those who have heard a lot about the legislation are more likely to oppose it (54%) than those who have heard a little (27%) or nothing at all (36%).

Most economists believe that if your goal is to reduce CO2 emissions, a carbon tax makes more sense than cap and trade. Cap and trade is, in reality, an indirect tax on the public. Carbon taxes on fuel would work best if: (1) fleet owners are provided invoices that clearly separate the carbon tax from the fuel sales tax; and (2) they are fairly constructed, meaning that fuels that emit more CO2 (diesel) are taxed at a higher rate than less polluting types of fuel (gasoline).

While a direct tax would send a clear signal to fleet owners, it would take several years, perhaps as long as a decade depending on how big the tax was, to replace inefficient trucks with newer models. This is another way of saying that the price elasticity of fuel is low, that upward changes on price have a relatively small effect on the quantity bought. Thus, any carbon tax should be combined with tax incentives to buy newer trucks. Further, early introduction of cleaner engines could also be stimulated by financial instruments such as preferential road toll rates. In Germany, for example, road toll discounts were introduced in 2005 which stimulated early launch of trucks that complied with Euro 5 emission standards.

In the last annual survey done by WERC, the average warehouse’s turnover was between 9.4 and 15 percent. This is too high, and turnover is expensive.  How can companies perform better in this area? Could the composition of the workforce make a difference?

In recent research conducted by the Pew Research Center, they comment that “the American work force is graying—and not just because the American population itself is graying. Older adults are staying in the labor force longer, and younger adults are staying out of it longer. Both trends took shape about two decades ago. Both have intensified during the current recession. And both are expected to continue after the economy recovers. According to one government estimate, 93 pecent of the growth in the U.S. labor force from 2006 to 2016 will be among workers ages 55 and older.”

Part of the explanation for this is that older people just value work more than the young. However, without automation, certain types of warehouse environments are too physically demanding for many older folks.

Another group that clearly values work is the disabled.  Walgreens has received a considerable amount of positive (and much deserved) publicity for a distribution center in Anderson, S.C. where more than 40 percent of the 700 workers are disabled.  ABC World News highlighted this story last year (click here to read the article and watch the video). Some Walgreens executives have said that by making the warehouse’s culture accepting to the disabled, they have improved the work environment for everyone.  But again we come back to automation.  Well thought-out ergonomics, enabled by automation, was the key to allowing Walgreens to employ a large number of disabled workers at this facility.

Automation is expensive, and most forms of “high” automation are a risky investment because of their inflexibility (see “Automated vs. Manual Warehouses: A Different Way of Thinking About ROI” for more on this topic).

Companies that employ the disabled can get a variety of tax incentives, improve their corporate image, and have a happier workforce.  But the right kind of automation will be the key to making this happen.

I generally leave the discussion of political issues that affect logistics to my colleague Adrian Gonzalez.  But one issue that I have been tracking is the “reset economy,” the idea that once we emerge from this recession, certain industries may not bounce all the way back.  In other words, they may not have the same growth and profitability they had before the recession.  One scenario that could negatively affect both the logistics industry and the electronics industry (which conducts a large percentage of its manufacturing in Asia) would be public opinions turning inward, turning against global trade as a way of protecting and growing their home economy.  You might expect that attitudes against global trade and for imposing more restrictions would increase during a global recession.  Surprisingly, according to recent research by the Pew Research Center, this is not occurring.

Support for free trade agreements has actually increased over the past year (from 35% to 44%) among Americans, based on a survey conducted between March 31 and April 21 of over 3,000 adults.  In some ways, it is surprising that the U.S. has continued to be a free trade nation for as long as it has.  If you examine historical data from the Pew Research Center, you discover that many more Americans say that free trade destroys American jobs, rather than creating them, or that it lowers wages, rather than raising them.  However, the past several Presidents have resisted rolling back free trade, perhaps in the belief that a strong economy is more important to their long term electoral prospects than short term gains in popularity.  When one looks at these historical survey results, it is surprising that more presidential candidates have not come out against free trade.

Cap-and-trade also has global trade implications.  In early March, Energy Secretary Steven Chu suggested the possibility of instituting a “carbon tariff” on countries (e.g., China) that do not mandate greenhouse gas emission reductions.  Frankly, I was surprised that it took so long for this trial balloon to drop.  Not surprising, Li Gao, China’s top climate change negotiator, thinks such a tariff would be a “disaster” that could trigger a trade war.  In short, as Adrian wrote in “The Road to Cap and Trade,” the prospect of a carbon tariff compounds the trade concerns already sparked by “Buy American” and the current NAFTA dispute with Mexico.

This March, when Pew asked respondents “Do you favor … or oppose… setting limits on carbon dioxide emissions and making companies pay for their emissions, even if that means higher energy prices,” 59 percent of Americans favored setting limits on carbon dioxide, while only 33 percent opposed it.  However, in the latest survey results, it appears that the recession is causing environmental issues to slip lower on Americans’ list of priorities.  As the Pew report states, “In the new poll, 51 percent agree that protecting the environment should be given priority even if it causes slower economic growth and some job losses, down from 66 percent in 2007.  At the same time, the share saying that people should be willing to pay higher prices in order to protect the environment has dropped from 60 percent in 2007 to 49 percent currently.  This represents a 17-year low point on this measure.”

Politicians analyzing these survey results are apt to conclude that restricting trade using trading partner carbon tariffs is not likely to be a winner in the political marketplace, at least not at this point in time.